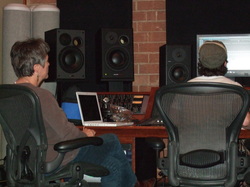 These singles have their own stories too.
The Picture - My mother had a first husband before my father. His name was Charlie Burnette. Their story is one of love, risk and ultimately sacrifice and tragedy. This is a story that needs to be told because, as I know, Betty and Charlie loved each other very much and made the most of their short time together. From a file that was found after my mother's death to research about train travel in 1943, The Picture tells this brief and important story of Betty Porter and her first love Charlie Burnette.
Ebb Tide - This song is about  loneliness; a universal human feeling. To me the sea is a thing of beauty but it can also be a metaphor for solitude and enormous isolation.
Amanda - Whew! What a different song for me! In 2007 a young Seattle woman moved to Italy and was soon accused of murdering her roommate. She was convicted and jailed until the Italian court totally exonerated her in 2015. The whole story intrigued me and "Amanda" is what I came up with.

Sewn To Remember - This is the first commercial song I have written My sister-in-law and friend Katharine Monk has opened a company that creates keepsakes from the fabrics of your life. Her seamstresses make garments and keepsakes out of clothing such as teddy bears made from a late husband's camel hair coat. My song Sewn To Remember will be used as theme music on her site.

Ocean Lady - Once there was this beautiful, talented woman. A mother, sister, friend and concert cellist. Ocean Lady is about this person who left this earth far too soon. I remember her strolling on the beach, straight and tall, her eyes toward the sunset. Ocean Lady features Alan Black on cello, Katharine Monk on piano and was produced by Jason Scavone.
This site and all my music will forever be dedicated to Betty and JR Nisbet