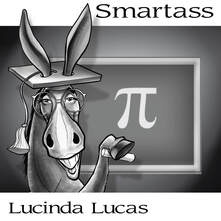 The Smartass songs are a definite departure from my normal style. All are tongue in cheek - all meant to bring a smile to your face.

Mama Thinks You're a Jackass came from how my mother, a truly Southern Lady, would occasionally let "jackass" fly. As in "he's such a jackass." So this song is in memory of Betty.

Jesus on the Telephone's inspiration came from the first recording studio I worked in. There would occasionally be interference from a local AM gospel station (unlicensed.) We'd be recording and suddenly I would hear HELLFIRE coming through the headphones. That morphed into Jesus on the telephone, Satan at my door...

Whiskey Tango Foxtrot - so I love all things aviation and like to use the NATO phonetic alphabet: alpha, bravo, charlie, delta and so on. So I always wanted to use WTF in a song. Ha!

I'm From a Long Line of Women (strong enough to shoot their man.) These are actual words from an actual woman I used to know. She was from West Virginia and explained that in the hills, occasionally men would just disappear. The men were usually no-good, drinkin', abusive people. I guess that's West Virginia's version of the Me Too Movement! In memory of Vivian.

Recording Smartass: We recorded these four songs at Sioux Sioux Studio in Charlotte in a "live" setting. Jason Scavone, my producer and basic musical genius, thought these songs would work well that way. He was really right. Thanks to Jason Scavone - acoustic guitar and banjo, Jonathan Erickson - drums and percussion, Stacey Leazer - upright bass, Matt Branniff - keys, acoustic guitar, accordion, Dan Hood - electric guitar, pedal steel. Thanks also to Dave Harris - Studio B Mastering.
This site and all my music will forever be dedicated to Betty and JR Nisbet